Thinking outside the box in North Philly...

Every once in a while the media covers a story on the good works of the Church. This was my mother's old  school, once an Irish parish called St. Columba's in the city's Swampoodle section. Not only surviving, but thriving. AMDG. 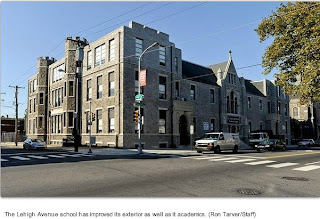 Partnership in Philadelphia could be model for inner-city Catholic schools

St. Martin de Porres School in North Philadelphia may have found the key to survival for inner-city Catholic schools.

Through a pioneering partnership with the Archdiocese of Philadelphia and local business leaders, the school at 2300 W. Lehigh Ave. has become an independent Catholic school overseen by an 18-member board but it retains ties to the archdiocese.

It is the only school in Philadelphia with such an arrangement.

Bolstered by an endowment of more than $4 million, a full-time development director, and fund-raising that covers a quarter of the school's $1.7 million annual budget, St. Martin de Porres has been able to increase enrollment and add programs without raising tuition.

"This has provided a growth and a transformation for the school and a real sense of stability," said Sister Nancy Fitzgerald, the principal. "When I register new families and I explain to them . . . that we are an independent Catholic school and that the archdiocese cannot close us, their eyes light up."

Her school has 400 students from kindergarten through eighth grade - 20 more than last year. Parents pay $2,460 per child.

The school's board, the archdiocese, and the nonprofit Business Leadership Organized for Catholic Schools (BLOCS) quietly signed documents in August 2010 making the school independent.

Officials are scheduled to publicly announce Tuesday the school's independence and its successful year-old transition.

"We're just thrilled that the group has come along to ensure that the school will continue," said Mary Rochford, superintendent of Catholic schools.

John F. "Jack" Donnelly, a business executive who is chairman of the Friends of St. Martin de Porres School Board, said the new approach shields the school from the cycle of rising costs and declining enrollment that causes several Catholic elementary schools to close each year.

"The goal is ultimately to use this as a model for other Catholic schools," said Donnelly, chief executive officer at L.F. Driscoll Co. L.L.C., a Bala Cynwyd construction-management firm.

A year ago, BLOCS pledged $4 million in matching grants to help St. Martin de Porres and six other urban Catholic schools create endowments. Although St. Martin de Porres has not yet raised the $5.75 million to qualify for its $225,000 match, the school is the first to become independent.

"We will be doing a full-court press" to get the match, Donnelly said.

Other area parish schools have become independent in order to continue serving low-income students in inner-city neighborhoods. In 1993, business leaders, the Jesuits, and the Sisters, Servants of the Immaculate Heart of Mary joined together to keep the Gesu School in North Philadelphia open after the archdiocese announced it would close it.

And when the lone surviving Catholic school in Chester was threatened with closure in 2006, the archdiocese, Neumann University, the Sisters of St. Francis of Philadelphia, and the St. Katharine Drexel Parish reached an agreement that created Drexel Neumann Academy...