22 July (birthday of John Deeney] is soon approaching, so I thought I write a few lines to you all. I am travelling to South India today and I will be travelling on 22 July and I will have no access to Internet till I return to my office on 23 July. So I dispatch this letter today itself.

John has been a great friend of mine though I am only 46. We used to spend a lot of time together sharing on different matters. I had a great appreciation for the works he had done and was continuing to do even in his old age. Our common interest was the Ho tribe. He taught me the Ho language when I was just 19, just before I joined the novitiate. Since then he has been an inspiration for me. The love I have for the Ho language and Ho people, I have acquired from John Deeney.

Even in his old age he worked on his computer for his publications in the Ho language. Even many youngsters who are good at computers find it difficult to work on Page Maker Programme, but John picked up Page Maker programme very easily. Regularly he would ask me give him some tips how to improve on his skills in Page Maker and he was a very good learner and was so grateful for small helps he received. Such was his dedication for the mission, the love the Ho language and the Ho people. We will find it difficult to get such an expert on the Ho tribals in the near future.

Those of you who visited him in Chaibasa would know the simplicity of life that he led. For so many years he used a bicycle to go around villages and he found it so helpful for his ministry that he never learnt how to ride a motor bike. He never complained about the heat of the summer or about the food that was served. He had no complaints about any of his Jesuits companions or working staff. He was always a positive man. Whoever met him met a saint in him - left inspired and deeply touched.

John was greatly spiritual and holy. He had a long of list of people who he prayed daily. And I knew very well that he added more people to that list daily. And he never was tired praying for them. I know all of your names were in that list. And I am sure he is continuing to pray for all the people in the list still. Many of our conversations were spiritual. And I was so comfortable to share my spiritual life with and return enriched.

I thank on behalf of all the Jesuits in Jamshedpur for the saintly man the Deeney family offered to the Church, the Society of Jesus and to Jamshedpur. I assure my prayers for you all. My special prayers and love to his dear sister Nancy and brothers Ed and Jerry.

God bless you all.

Join the Prep at the shore this August!

$50/Person Online or at the Door

Why care for Haiti? 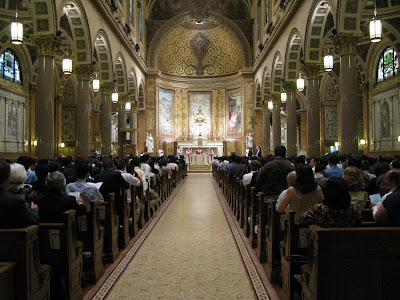 Mr. Hamill remembers the idea of a belated diploma as having begun with a Regis classmate, Thomas Hickey, a retired lawyer in Paramus, N.J. Mr. Hickey’s recollection is that after the list of 400 celebrated New Yorkers was announced in September by the Museum of the City of New York, Mr. Hamill told him, “I’d much rather have a Regis High School diploma on my wall.” Arrangements were made. He will receive his certificate from the school’s president, the Rev. Philip G. Judge, S.J.

Mr. Hamill makes no pretense of being much of a Catholic. “Somebody once said there’s no ex-Catholic, there’s only retired Catholics,” he said. “Because of the music and the architecture and the structure of the Mass and all that, it stays with you. I’m a retired Catholic.”

The Jesuits stayed with him, as well. “They put doubt in you, intellectual doubt,” Mr. Hamill said. “Someone presents a thesis, you back up and say, ‘Is that really true? How do we know that’s true?’ ” The Jesuits, he said, also bequeathed “standards of excellence — you couldn’t just show up.”

“Even now, as old as I am, I have this secret Jesuit over my shoulder,” he said. “I think I’ve written a pretty good paragraph and he’s shaking his head: ‘C’mon, pal. Better try that again.’ This critical intelligence directed at yourself is very good. In that sense, those two years at Regis shaped a lot of what I did later, because I was never satisfied.”
Posted by 44 at 1:15 PM No comments:

From the letters to the editor in the ...

Your article "What parents want from schools" (Tuesday) points out what we at Business Leadership Organized for Catholic Schools (BLOCS) already know: Catholic schools are a vital and necessary option for parents throughout Philadelphia.

Philadelphia's archdiocese schools play a key role in the educational economy of the city. These schools provide a good education at no cost to the taxpayer, and offer the chance at a better life for thousands of children in the hardest-hit neighborhoods in the city. At BLOCS, we're working hard to make sure that the tens of thousands of children who attend Catholic schools in Philadelphia are able to continue receiving a strong, values-based education, regardless of family income level.

Improving access to a high-quality education is of critical importance for the children of Philadelphia. In order to do so, we need to work across the traditional lines and include public, charter, private, and Catholic schools in the effort to better educate our city's future generations.