I would add to Jim's thoughts -- what if the 228 Catholic colleges in the US, led by the 28 Jesuit colleges and 68 Jesuit high schools, took a stand and, following Catholic Social Teaching, refused to wear Nike until they paid their workers a living wage? Why can't extremely profitable businesses "Just Do It"... and by that I mean just do the right thing, for the least of their brothers and sisters? Jim estimates that all those making sneakers for Nike in Indonesia could make a living wage if Nike gave Lebron James 97 million, instead of 100 million he currently earns to wear and make commercials for Nike
.
I have been unable to discern how my alma mater St. Joseph's, Philadelphia's Jesuit college, could honor Jim Keady with the St. Ignatius Award (in the service and promotion of Saint Joseph’s University and/or has lived a life of “service to others” consistent with the principles of Saint Ignatius Loyola, founder of the Jesuit order) for his work in attempting to get Nike to pay its workers a living wage... and then outfit all their sports teams in Nike.

Hypocrisy. But one we could change. 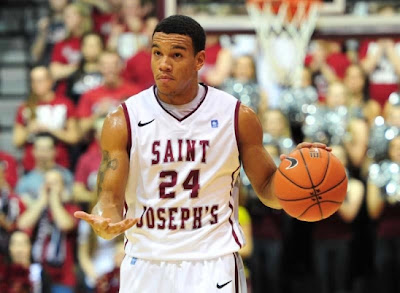 In the near fifteen years I have been working to end Nike's sweatshop abuses and make Nike a fair trade company, I have watched with great pain as Nike has aggressively colonized Catholic schools across the nation. In fact, this is how my work started. Back in 1997, while an assistant coach as St. John's University, I said that because of Nike's exploitation of their overseas workers, our Catholic university should not be party to the $3.5 million dollar endorsement deal Nike put on the table. I lost that battle and since have witnessed Nike continue their march across the Catholic school landscape, spreading their imperial values - values that run completely counter to the ethos of Jesus' Gospel. For their part in bowing to the Nike empire, our Catholic schools get some free gear and at times cash and other perks and Nike gets their allegiance and more importantly, public witness (via our student athletes) that Nike has the backing of some of the greatest Catholic institutions in the United States. Very simply, our Catholic schools sell their names and reputations to Nike for a pair of sneakers and a buck and they offer up our student athletes as walking advertisements for the Nike empire. For Nike's part, it is brilliant. For our Catholic schools' part, it is sad indeed.

For many, the Nike sweatshop issue is not breaking news. The plight of Nike's overseas workers has been covered by reporters, academics and activists for many years. In this time, Nike has done well to manage the public relations backlash and Catholic schools have been a key component in their game to convince consumers that "Nike fixed their sweatshop problem." While Nike has made modest strides at addressing some abuses (the use of toxic glues, sexual harassment, physical abuse, etc.) they have absolutely refused to deal with the key demand that has consistently been pressed by Nike's overseas workers and those who advocate in solidarity with them - workers want to be paid a living wage.

On the issue of a living wage, Catholic Social Teaching is quite clear. Pope Leo XIII's encyclical, Rerum Novarum, states "that the remuneration must be enough to support the wage earner in reasonable and frugal comfort." (#34) The U.S. Catholic Bishop's Pastoral, Economic Justice for All, tells us that "the way power is distributed in a free market economy frequently gives employers greater bargaining power than employees in the negotiation of labor contracts. Such unequal power may press workers into a choice between an inadequate wage and no wage at all. But justice, not charity, demands certain minimum guarantees. The provision of wages and other benefits sufficient to support a family in dignity is a basic necessity to prevent this exploitation of workers." (#103) And Pope John Paul II, in his encyclical, Laborem Exercens, exorts "Hence in every case a just wage is the concrete means of verifying the justice of the whole socioeconomic system and, in any case, of checking that it is functioning justly. It is not the only means of checking, but it is a particularly important one and in a sense the key means." (#19)

Having spent so many years documenting the spending power of Nike's workers, I can tell you with authority that their wages certainly do not meet the benchmark of a living wage as set forth by Catholic Social Teaching. If you question this, I encourage you to CLICK HERE and watch a clip from my most recent round of spending power research for Nike's workers in Indonesia.

It is because of the lack of action on paying a living wage that Catholic schools are so important in Nike's public relations war. Think of it like this. Let's say you are an alumnus from St. Joseph's University, the Jesuit school where I did my undergraduate degree. And let's say that you are somewhat aware of the Nike sweatshop issue. Then you see the picture above.

Without saying a word, this image makes the statement to you that, "Nike must have cleaned up their act." Why? Because, you think, "there is no way that a Catholic, Jesuit, university would ever do business with Nike if they were still paying their workers poverty wages." This image tells people that Catholic schools like St. Joseph's University are behind Nike 100%. It tells people that Catholic schools are so much in support of Nike that we are willing to allow our student athletes to advertise their products to the masses. It tells people that Nike must be paying their workers living wages, if they weren't, why would this Catholic school allow itself to be used by Nike as a marketing tool?

I can tell you why our Catholic schools allow it to happen.

First, many are of the belief that Nike has fixed these problems because Nike has lied and they got a few Catholic schools on board with them. Once this happened, the domino effect took place - administrators think, "if these other Catholic schools have done these endorsement deals, Nike must be ok" and they act without exercising the hermeneutic of suspicion."

Second, if administrators are aware of Nike's violations of Catholic Social Teaching, rather than standing up and being a voice for the voiceless, they adopt the herd mentality noted above ("everyone else is doing it) and/or they cave to pressure from Athletic Directors, Business Managers, Board Members and powerful alumni and donors to go with the flow.

If by chance, administrators are willing to take on the issue, many times the schools want an easy out. They ask, "Ok, if we do not wear Nike, who should we wear?" This is not the question we should be asking as a Catholic school! This struggle for justice is not about who YOU should or shouldn't be wearing. It is about the WORKERS. It is about taking the preferential option for the poor. It is about working in solidarity with our brothers and sisters in these factories to bring Nike to a point where they pay workers a living wage. The question we should all be asking at our Catholic schools is, "If Nike is violating Catholic Social Teaching and they are not paying workers a living wage, what can we do to change that?"

1. If your teams are currently wearing Nike products, immediately make a public and provocative statement and cover up every Nike logo with a patch. This may violate the terms of your contract with Nike and may cost you whatever Nike is giving to you. So be it. At times, the Gospel demands radical action and with it, painful consequences. For individual athletes, if your school is not willing to take this action collectively, do it yourself. You may be the spark that lights the flame of revolution.

Using St. Joseph's University as an example, the Nike logos could be covered with something like this.

2. Take every penny of money that has been given to your high school or university from Nike and give it to Catholic Relief Services, Jesuit Refugee Services, etc.and make a public statement as to why you are doing this.

3. Engage Nike publicly on the issue of a living wage for their factory workers. Write them open letters. Hold on-campus prayer services. Send delegations to the Nike campus to meet with Nike executives. Hold press conferences announcing all these actions...

Why must we do these things?  "Because we are Catholics." And because we are called by our Catholic faith, in the words of Pope Paul VI, "to carry forward the work of Christ himself under the lead of the befriending Spirit. And Christ entered this world to give witness to the truth, to rescue and not to sit in judgement, to serve and to be served."

Ahhh... AMDG or JMJ at the top of every paper. A worthwhile article that will remind you of that one teacher who made a difference in your life. Click on the title to read the entire article and to read about his passing click Beloved Brophy Jesuit Dies or Memorial to Fr. John Becker, SJ, 1925 - 2008.

To read one of Father Becker's novels click here or here!


...At St. Ignatius -- in Father Becker’s class and all others -- we wrote the letters AMDG at the top of our papers. They stand for “Ad Majorem Dei Gloriam” -- To the Greater Glory of God. These are the strategic watchwords of the Jesuit order: Everything ultimately must serve this purpose.

Father Becker taught us that Shakespeare was great not only because of the power and wit and poetry in his language but because his plays truly served the greater glory of God. They helped readers see good and evil and the consequences of choosing one over the other.

Father Becker also taught by example. He had the skills to succeed in many lucrative professions. But he took a vow of poverty and spent five decades as a good and faithful priest teaching boys to become strong and confident Christian men in an increasingly secular world.

In his later years, Father Becker published two mystery novels, while a third was published posthumously after he died three years ago. The hero, Father Luke Wolfe, teaches English at a Jesuit high school and spends his spare time at abortion clinics -- praying the Rosary.
Posted by 44 at 6:03 PM 1 comment: