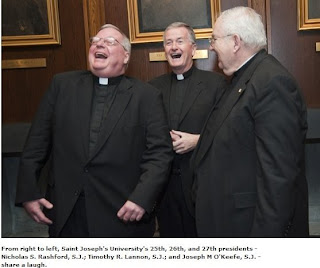 PHILADELPHIA (January 24, 2011) – The Saint Joseph’s University Board of Trustees today elected Joseph M. O’Keefe, S.J., as the University’s 27th President. Currently the dean of the Lynch School of Education at Boston College, Father O’Keefe will take office May 18, 2011. He will succeed Timothy R. Lannon, S.J., who is leaving at the end of the current academic year to become president of Creighton University in Omaha, Neb.

“The members of the Board of Trustees are excited to introduce Fr. O’Keefe as the next president of Saint Joseph’s University,” said Paul Hondros ’70, chair of Saint Joseph’s Board of Trustees. “We were seeking a leader with a deep commitment to education and academic excellence as well as the vision to advance the University and address the needs of the students of the future. Fr. O’Keefe more than fulfills those aspirations.

“Fr. O’Keefe’s success as a leader at Boston College and his deeply rooted commitment to the Jesuit, Catholic tradition make him extraordinarily qualified to boldly move Saint Joseph’s forward at a challenging time for higher education,” he added.

“The election of Fr. O’Keefe followed an intensive and rigorous search, and I thank the committee members for their dedication to this process,” said Robert Falese ’69, who chaired the search committee. “We sought a leader with superlative credentials, including scholarly excellence, significant leadership experience and success in fundraising. Clearly, we have found what we were looking for in Fr. O’Keefe.”

During his tenure as dean, he was instrumental in securing two major gifts: $20 million to launch the Lynch Leadership Academy, a training program for novice principals in urban schools; and $20 million for the Center for Catholic Education, a clearinghouse for research, policy and practice on issues critical to Catholic schools and universities.

A nationally and internationally renowned educator with expertise in urban Catholic schools, international comparative education and community service learning, Fr. O’Keefe holds a doctoral degree in administration, planning and social policy from the Harvard University Graduate School of Education. He earned his bachelor’s degree in philosophy from the College of the Holy Cross and master’s degrees in French literature and divinity from Fordham University and Boston College School of Theology and Ministry, respectively.

“I am honored by the vote of confidence of the Board of Trustees and to have the opportunity to serve Saint Joseph’s University as its 27th president, Fr. O’Keefe said. “And I am excited by the challenges of building on the momentum here, working with an outstanding and dedicated faculty and advancing the vital partnerships Saint Joseph’s has with the local, regional and global communities. It’s a beautiful campus in an exciting and vibrant city, and I can’t wait to call both my home.”

Fr. O’Keefe has been the dean at Boston College’s Lynch School of Education since 2005, after serving as the School’s associate dean (2001-03) and then interim dean (2003-05). He has written extensively about Catholic education and the challenges facing Catholic schools, both urban and rural, in the 21st century, with a focus on providing educational opportunities at all levels, particularly for those from lower socioeconomic backgrounds and underserved populations.

“Saint Joseph’s is indeed fortunate to have found such a consummate leader,” said Fr. Lannon. “While for me it will be a bittersweet departure, I am thrilled to know that the University will be in the hands of Fr. O’Keefe, whose accomplishments in the education arena are a testament to his outstanding academic leadership.”

Background: Founded by the Society of Jesus in 1851, Saint Joseph's University advances the professional and personal ambitions of men and women by providing a demanding, yet supportive, educational experience. One of only 141 schools with a Phi Beta Kappa chapter and AACSB business school accreditation, Saint Joseph's is home to 4,600 traditional day students, 750 College of Professional and Liberal Studies adult undergraduates and 3,500 graduate and doctoral students. Steeped in the 450-year Jesuit tradition of scholarship and service, Saint Joseph's was named to the 2009 President's Higher Education Community Service Honor Roll for General Community Service. The University strives to be recognized as the preeminent Catholic comprehensive university in the Northeast.


Rev. Joseph O'Keefe, S.J.Fr. O'Keefe, who has served as dean of the Lynch School since 2005 and who oversaw its ascendancy to the top-ranked Catholic school of education in the United States, will be named the 27th president of the Jesuit university at a ceremony beginning at noon today in St. Joseph’s student center.

Prior to being named dean, he had served the Lynch School as interim dean from 2003-2005 and associate dean from 2001-2003, and as a faculty member since 1991. During his tenure as faculty member he also served as coordinator of the educational administration program and the Catholic School Leadership Program, as well as coordinator of the Lynch School-based Spiritual Growth Leadership Seminar and Selected Programs for Improving Catholic Education (SPICE) initiative.

“Fr. O’Keefe is a dedicated, engaging Jesuit who has contributed so much to Boston College for the past 20 years as a priest, faculty member and dean,” said University President William P. Leahy, S.J. “He understands the importance of integrating intellectual excellence and religious commitment, and he works well with others. I know he will be missed on campus here, especially at our Lynch School. We wish him the very best in his new role as president of St. Joseph’s University.”

Fr. O’Keefe acknowledged that while he is delighted to assume the presidency at St. Joseph’s, he will miss BC and the many lasting friendships he has established over these past 20 years.

“Though I feel great sadness as I leave this remarkable place, I am so grateful for my colleagues on the faculty and staff, for the students I have met, for the generous donors who have supported us and for our partners in the City of Boston and beyond,” said Fr. O’Keefe. “God has blessed me beyond all measure during these past two decades. I am confident that the Lynch School will continue to thrive, and that Boston College’s best days are in the future.”

A native of Salem, Mass., Fr. O'Keefe graduated from the College of the Holy Cross in 1976 and joined the Society of Jesus that year. He taught at Bishop Connolly High School in Fall River before earning his master's degree in French at Fordham University. He also taught for three years at Cheverus High School in Portland, Maine, counting among his students BC’s Vice President for Student Affairs Patrick Rombalski. Fr. O’Keefe received a licentiate in sacred theology from the Weston Jesuit School of Theology and a doctorate in education from Harvard University.

Fr. O’Keefe will remain at BC until March 1. Decisions on an interim dean and the formation of a search committee to find a successor have not been announced.Fr. O’Keefe becomes the second academic dean at Boston College to be appointed to a college presidency within the past year, following former BC Law School Dean John Garvey, who was named president of Catholic University in June.