'You go in their door. You bring them out ours.' 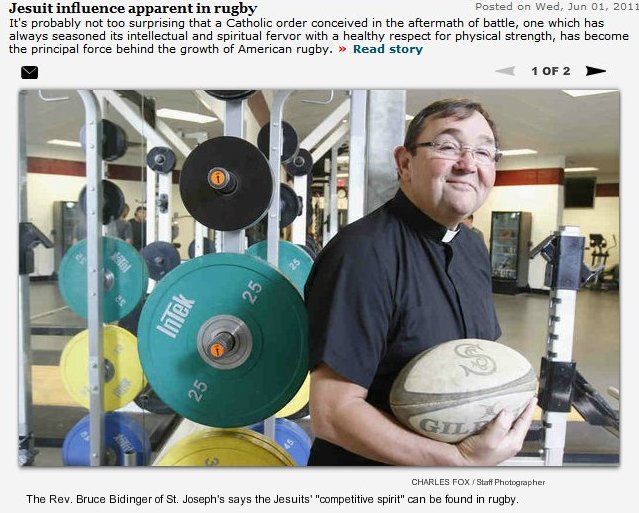 
It's probably not too surprising that a Catholic order conceived in the aftermath of battle, one which has always seasoned its intellectual and spiritual fervor with a healthy respect for physical strength, has become the principal force behind the growth of American rugby.

So many Jesuit high schools and colleges are playing and succeeding at the rugged and increasingly popular sport that it seems as if the 477-year-old religious order, founded by a converted Spanish soldier, Ignatius of Loyola, has added rugby devotion to its vows of poverty, chastity, and obedience.

"The whole idea of what Ignatius inspired in Jesuits, a competitive spirit and the development of the whole person, is really alive in the sport," said the Rev. Bruce Bidinger, a Jesuit counselor at St. Joseph's University and the chaplain for that school's basketball team.

The traditional game, with 15 players on each side, and the hybrid "sevens" version, with seven players per side, of the sport are experiencing an American boom, nowhere more so than at the 80-plus Jesuit high schools and colleges from coast to coast.

While Boston College will be the only Jesuit school competing at this weekend's 2011 USA Sevens Collegiate Rugby Championship in Chester's PPL Park, the rosters of the 15 other teams will be teeming with Jesuit high school products.

In a recent Rugby Magazine poll of the nation's best high school rugby teams, five of the top 10 - and seven of the top 17 - were from Jesuit institutions in Sacramento, New York City, Dallas, New Orleans, and Washington.

Though Gonzaga of Washington was the top-rated team for much of 2011, this year's high school championship was won by Jesuit High of Sacramento over Xavier of New York, the latter a Jesuit school in Manhattan's Chelsea neighborhood.

That rugby-Jesuit connection is evident locally, too, as St. Joe's Prep, rated 17th in that same poll, captured this year's Pennsylvania rugby title. Its program - like most, a club-level sport - was formed in 2005 by three teachers at the North Philadelphia school, all graduates of Jesuit universities.

Overall, there are 28 Jesuit colleges and universities in the United States. Most, like St. Joe's, Scranton, Georgetown, Santa Clara, and BC, have rugby teams. Almost all play at the club level since rugby is not an NCAA-approved varsity sport.

Bit of spunk
Jesuits, whose guiding philosophy about the union of body and spirit is the Catholic counterpart to the Protestant notion of "muscular Christianity," have long advocated for sports.

Most of their colleges are too small to compete effectively with the wealthier and more populous state schools in football, but they have a history of success in basketball and lacrosse. Rugby fits neatly into that tradition.

"I don't have any definitive answers [as to why the links between rugby and Jesuits are so strong]," said Colin Curtin, a BC star who played scholastically at St. Joe's Prep. "There doesn't seem to be any reason why there are such great rugby programs and rugby cultures at these schools. But there is. The correlation is unbelievable."

According to Curtin, plans are in the works for a 2012 Jesuit collegiate tournament featuring BC, Georgetown, Santa Clara, and Fairfield.

Curtin said that in his senior year at St. Joe's Prep, when the rugby team played in the national championships, "at least three or four of the other teams were from Jesuit schools."

"It's a sport that allows a lot of people to fit in," said Bidinger. "You don't always have to be the most fit or the strongest. In that sense, it's inclusive. For rugby, all you need is a little bit of spunk and a little bit of energy."

Notre Dame, operated by the Holy Cross fathers, recently reinstated its rugby team, a response, some insiders suggested, to the school's losing too many Jesuit-trained athletes to Jesuit colleges.

Some suggest an Irish connection is at work. Rugby is among the most popular sports in Ireland. And since the student bodies at many Catholic high schools are overwhelmingly Irish, parents and students there naturally have pushed for the sport.

"[Those connections] have made many Catholic school administrators more open to the sport," said Goff.

The progenitor of American football and long a sporting afterthought on this side of the Atlantic, rugby began slowly digging a foothold at Catholic colleges and high schools in California and the Northeast during the 1960s.

While the process of adding another sport in public schools could be bureaucratically challenging, other Catholic institutions were able to establish teams quickly and, in the process, attract new students.

"These schools were finding success on a national stage, and [others] began to follow suit," said Goff. "Enthusiastic coaches realized that they could persuade a Jesuit school to start a rugby program much more readily than any other type of school. . . . Any coach who wanted to coach high school rugby only had to sell [the idea] to one administration at a private Catholic school rather than to an entire school district."

The Jesuits, of course, being a religious order, have not overlooked the opportunities rugby offers for evangelizing.

"It's like St. Ignatius said," the Rev. James Keane, a Jesuit with a passion for the sport, said of that possibility, " 'You go in their door. You bring them out ours.' "