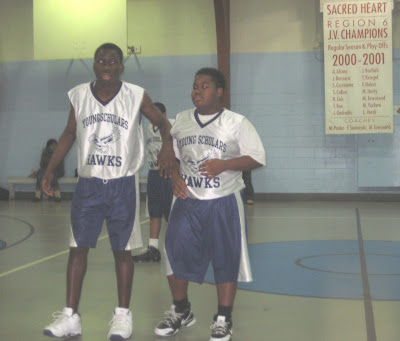 Coaching grade school basketball in the inner-city sometimes gets romanticized, for good reason. Other times, many times however... the kids, and their stories, can break your heart. Then you meet a boy like Dad Poquie and you realize why you continue to donate your time.

I'll begin by telling you how strange it was to coach a kid named Dad! "Pass the ball, Dad", "box out Dad"... but you got used to it ;-) Dad didn't play much basketball before our paths crossed but he is a gifted athlete and extremely coachable. He was frustrated at the beginning of 7th grade because he couldn't make a layup. I took him aside for 45 minutes one night at the Prep and showed him how to shoot a layup off the proper foot. I don't think he's missed a layup since.

He was our team captain in 8th grade, and was a pleasure to coach. While he was one of the fastest boys on the team... he always placed 1st or 2nd when running suicides, but not because he was fast but because he always gave his best. He was never late for a practice or game even though he took the trolley and subway each day (and at night on practice days) from Southwest Philly to get to Young Scholars in North Philly. I think that's called "dedication". I am thrilled to say that he will be attending La Salle College High School in the fall. The good Christian Brothers gave him a very generous financial aid package and Dad and his mom are excited!

They had a contest at Young Scholars Charter School to deliver a speech at graduation. Dad won, and brought the house to tears during his speech. Remember that this speech was written by an 8th grader. It is a refugee's story, it is the story about the love of a mother, it is a story about how public education can work... it is an American story.

I mentioned how fortunate Dad is to be attending LaSalle. Soon though LaSalle will realize how fortunate they are to have Dad Poquie in their student body -- and someday they will be bragging about this alumnus. 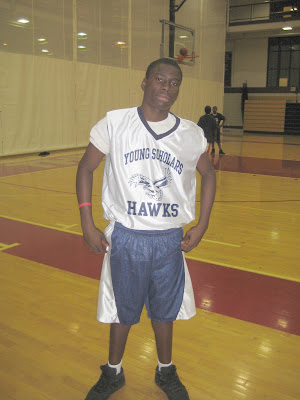 As team captain for the YSCS Hawks Dad got to model our new unis.

This afternoon is a particular honor for me because my presence at this ceremony today is pretty unlikely. You see, I was born an ocean away, in the African country of Liberia. During a bloody civil war. As a child my family was forced to flee the shootings and killings. Together, we walked hundreds of miles to the Ivory Coast, making sure to avoid the main highways but instead we made out way through swamps and forests. We had become refugees. We stayed in a refugee camp on the Ivory Coast for four years, and then, finally, we came to America.

Back home in Liberia my mother sold groceries, but after arriving here she had no means of earning a decent living. However, luckily for my family, she was trained as a nursing assistant through President Bill Clinton's "welfare-to-work" program, and was then able to care for our family.

But I can't say that my first school made me feel like I could do anything. Instead of studying kids at my old school mugged each other. Things were so bad that every time I stayed after school to do homework, my mother was terrified I wouldn't come home.

So for the second time in my life my mother decided that things had to change. She decided to send me here, to Young Scholars. I can still remember my first day. I remember feeling butterflies in my stomach as I put on that blue shirt for the first time. I remember my mom was nervous too; as I waited for the trolley, she grabbed my hand and I could feel her hand shaking, her palm getting sweatier by the moment.

Over time I found I liked what Young Scholar's was all about. Community Circle was great because it let me, and I think a lot of us here, become closer with the teachers and students alike. Equally important, Community Circle taught us to speak confidently, to respect others, and to recognize the contributions of all community members. I think it taught us another lesson. I'd always thought of learning as something that happened in the classroom, as something bestowed by someone like Mr. Doc. But Community Circle made me realize that sometimes all you need for learning is an empty space, your classmates, and an attentive ear.

Still I think we can agree that there was plenty of traditional learning too. I remember at the start of my time here at young Scholars I was overwhelmed by the work load. I'm sure that everyone here today, at some point or another, has had to push themselves to finish their homework late at night. And who can forget Ms. Gwin's Language Arts class? She worked us to the point where procrastinators like myself found that class work became homework if it wasn't completed in class. Indeed Young Scholars has held us to a tough standard; "Urgency, No Excuses, High Expectations."

Over the last three years we have learned to accept responsibilities, voice our opinion, and meet challenges head on. We have become confident, ambitious, and successful students. I stand here today knowing that I am firmly on the path to fulfilling my mother's dream. And I realize that my story is really no different from your stories. We may have started from different paths, but today we end this journey together.

I say "end" but in a sense there is no end to this journey. We will go on to different high schools, colleges, and live different lives. But in all of this, there will never come a time when the values we have learned here together cede to be important, to matter, I tell you that if we remain true to the spirit of this place, we will find success in whatever we do.

I leave you with one final thought.. Today we celebrate and put to rest one journey, but we awaken to a new one. 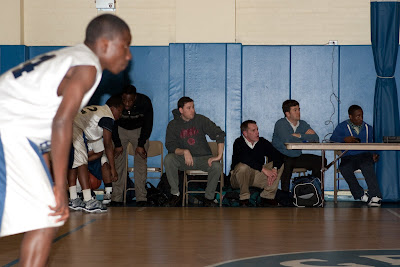 I always loved this pic of Dad as Chad from CwicksPhotos.com perfectly captured his intensity.
Posted by 44 at 8:02 AM